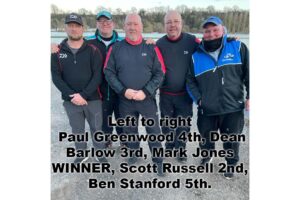 The Larford Specimen Lake hosted 40 anglers for this very popular festival.
Extremely heavy rain fall over a period of two weeks just before the festival presented us with big problems.
Flood barriers were fixed at both Ironbridge and Bewdley forcing volumes of flood water our way. The river left its banks, flooding all the lower land between Bewdley and the Bristol Channel causing mass flooding including Larford Lakes.

The Complex was unfishable on the Specimen Chalet bank, but the middle burr allowed day 1 to go ahead, even though the anglers had to fish the top of the burr bank on the roadway. 16 of the field decided not to fish, but the remaining 23 anglers stopped on to enjoy some excellent silver fish catches.

Due to the rise of the water levels, the first two days of the festival allowed the anglers to continue fishing along the Specimen Burr bank but day 3 (Wednesday) everyone had to switch to the Match Lake Grass bank.
Although everyone was plagued with carp and F1’s, some great catches of silvers were recorded including an all roach catch of 40-2-0 going to Sean Wright on peg 6 of the Match Lake.

Day 4 the water levels started to drop, allowing everyone a day on the Specimen Burr which produced some excellent bream fishing capping off the festival.

Feeder was the winning method with most anglers on the Specimen Lake, fishing short and long line with dead reds and worms. Worms being the most successful bait overall.

The Match Lake was dominated by the pole fishing long and short with casters or live red maggots.

Winner of the festival was Mark Jones with a points score of 7 and an overall weight of 102-9-0.

2nd overall was Scott Russell, again with 7 points, but a lower weight of 66-8-0

3rd place went to England International, Dean Barlow with 8 points and an overall weight of 116-9-0.

4th to the frame was Paul Greenwood, also scoring 8 points, but a lesser overall weight of 74-3-0.

5th overall was Ben Stanford with a points score of 10 and an overall weight count of 75-8-0.

In all, an excellent and friendly silver fish festival which produced some great silver fish weights overall despite some serious flooding effecting all of the complex.

In all a total weight of 1390lbs was recorded over the four days, which averaged just over 60lbs of fish per competitor (15lbs per angler per day).

There were 4 weights recorded over 40lbs, 6 weights over 30lbs and 16 weights over 20lbs, backed up by multiple 15-19lbs weights daily.