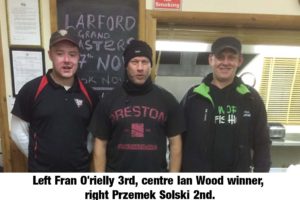 Winner on the day, collecting £600, was Ian Wood (Larford) who drew peg 75 on the Specimen Lake.

2nd on the day was Polish rod Przemek Solski who drew peg 10 on the speci burr.

3rd on the day was Fran O’reilly ( Bagem Baits, Rays Tackle) who drew peg 28 on the match.

Shaun caught on Method and down his edges.

Qualifiers for the Grand Masters Final-