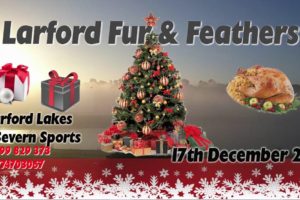 40 anglers turned out for the Larford Fur & Feather match. Great day for all with loads of prizes for all competitors.

The match was fished on the Match Lake, Specimen and Arena Lakes.

Winner on the day was Phil Briscoe (Larford) who drew peg 11 on the Arena Lake.

2nd on the day was John Jones (Larford) who drew peg13 on the Arena Lake.

John fished method early and then changed to 14.5m and pellet landing carp to 8lbs to weight 80-12-00

3rd on the day was Kristoff Frackowiak who drew peg 9 on the Arena Lake. Kris fished Method to land 71-03-00 of carp.

6th overall was Bill Cambell who drove from Nottingham.