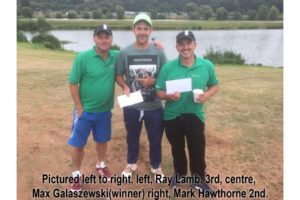 Later switching to his edge, Max found large carp to ground bait and meat to finish the day with 174-12-00.

2nd on the day was Mark Hawthorne (Larford) who drew peg 18. 2nd placed mark Hawthorne with an 18lb carp which helped him to 2nd overall in the Larford Lakes european pole championship.