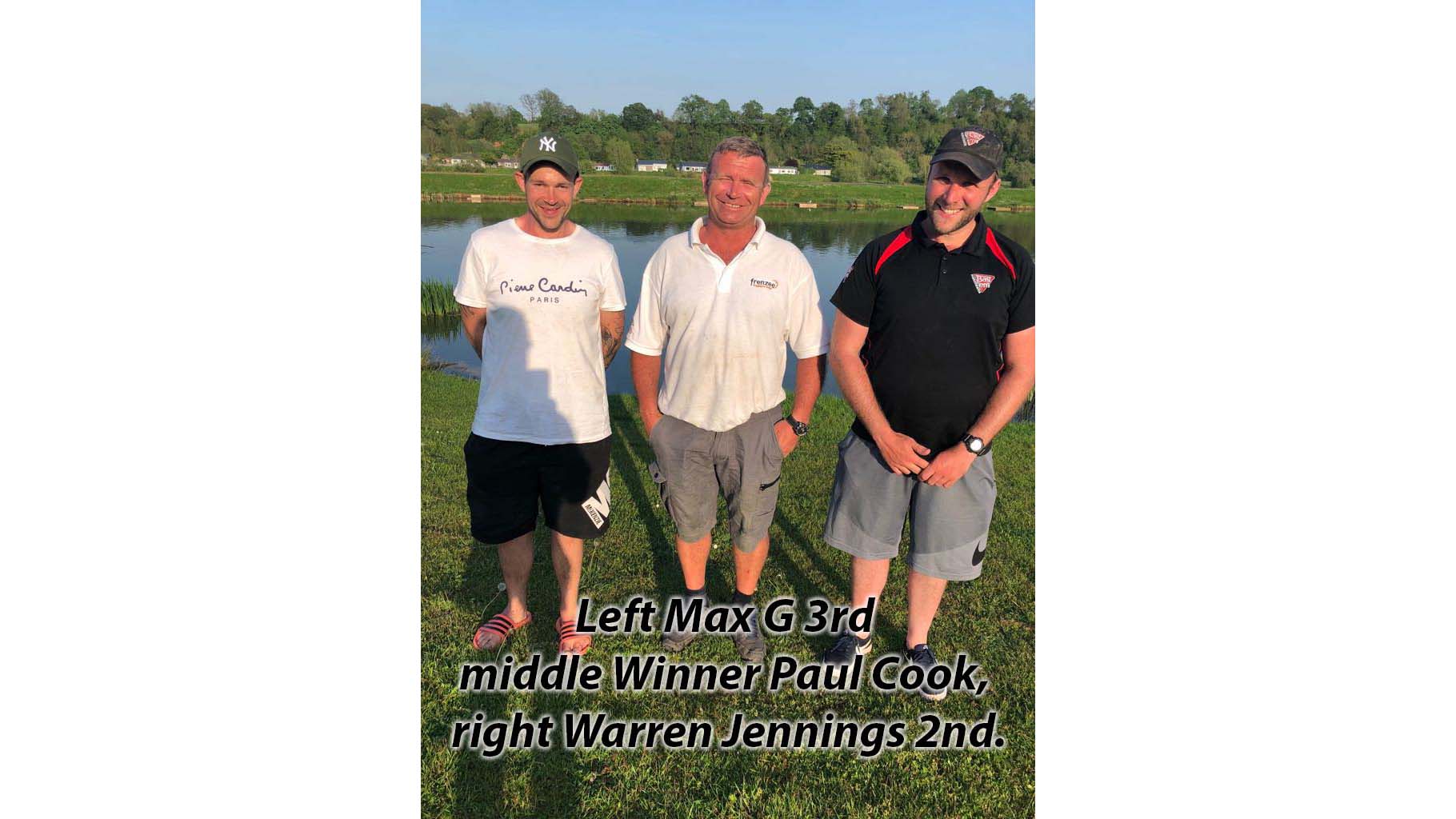 Conditions for the Larford Classic were hot and very little breeze.
Fish were all swimming shallow on both lakes. Tactics generally was long pole with pellet or meat shallow.

Winner individually on day 1 was Warren Jennings (Bag’em) who drew peg 4 on the Specimen Lake.
Warren found carp from the word go, landing 350-0-0 to pole and meat shallow, landing carp to 15lbs.
He was also knocked back by a near 25lbs due to being overweight in two of his nets.

2nd on the day was Richie Hull (Garbolino) who drew peg 20 on the Specimen Lake.
Rich fished the long pole with meat shallow landing 289-02-00 of quality carp.

4th on the day was Richie Lawson (Total Angling) who drew peg 4 on the Match Lake. Rich caught all of his fish on meat shallow at 8m and down his edge to depth weighing on 224-04-00.

5th on the day was Grant Albutt (Drennan) with 203-11-00 from peg 50 on the Match Lake.
Grant fished long pole shallow with meat and pellet and caught later down his edges.

6th placed Mick Bull (Frenzee/ Bagem) weighed in 167-14-00 from peg 64 on the Specimen Lake.
Mick caught on the long pole shallow with meat.

Winner overall on day 2 was Prezmek Solski who drew peg 64 on the Match Lake.
Prez fished tight to the bank with meat to land an mixed bag of F1’s and carp for a total weight of 259-11-00.

2nd placed Chris Senter (Larford) drew peg 8 on the Match Lake.
Chris caught shallow and down his edge with meat and pellets to weigh 249-02-00.

3rd on the day was Luke Webster (Bag’em) who drew peg 6 on the match lake.
Luke fished pellet and meat shallow and down the edge to weigh 249-00-00.

4th placed Max G drew peg 4 on the Specimen Lake catching a few carp early on the long pole and meat shallow. Later switching to his edge to land quality carp for a total weight of 195-02-00.

5th on the day was Paul Cook (Frenzee) who drew peg 74 on the Specimen Lake.
Paul caught most of his carp shallow on the pole with meat then later switched to his edge to finish the match with 179-00-00

6th placed Harry Harris (Larford) drew peg 44 on the Match Lake weighing in 175-13-00.
Harry caught most of his fish down the edge.

Section winners collected £50 per section and the Lake winners picked up £100.
In total over the 2 days, over 10,000lbs of fish were weighed in.
The average per day per angler was 116lbs per man.