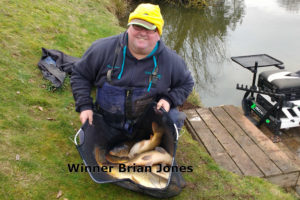 Much milder conditions greeted the field of 16 pairs (32 anglers) and carp on the match lake fed well.

Winner overall on the day was Brian Jones (ABC Baits) who drew peg 35 on the Match Lake.

Chris caught 48 lb of bream and later switched to his edge to find 5 carp on corn.