Bag’em Larford Classic is coming to Severn Sports & Leisure May 2019 for another quality match competition. 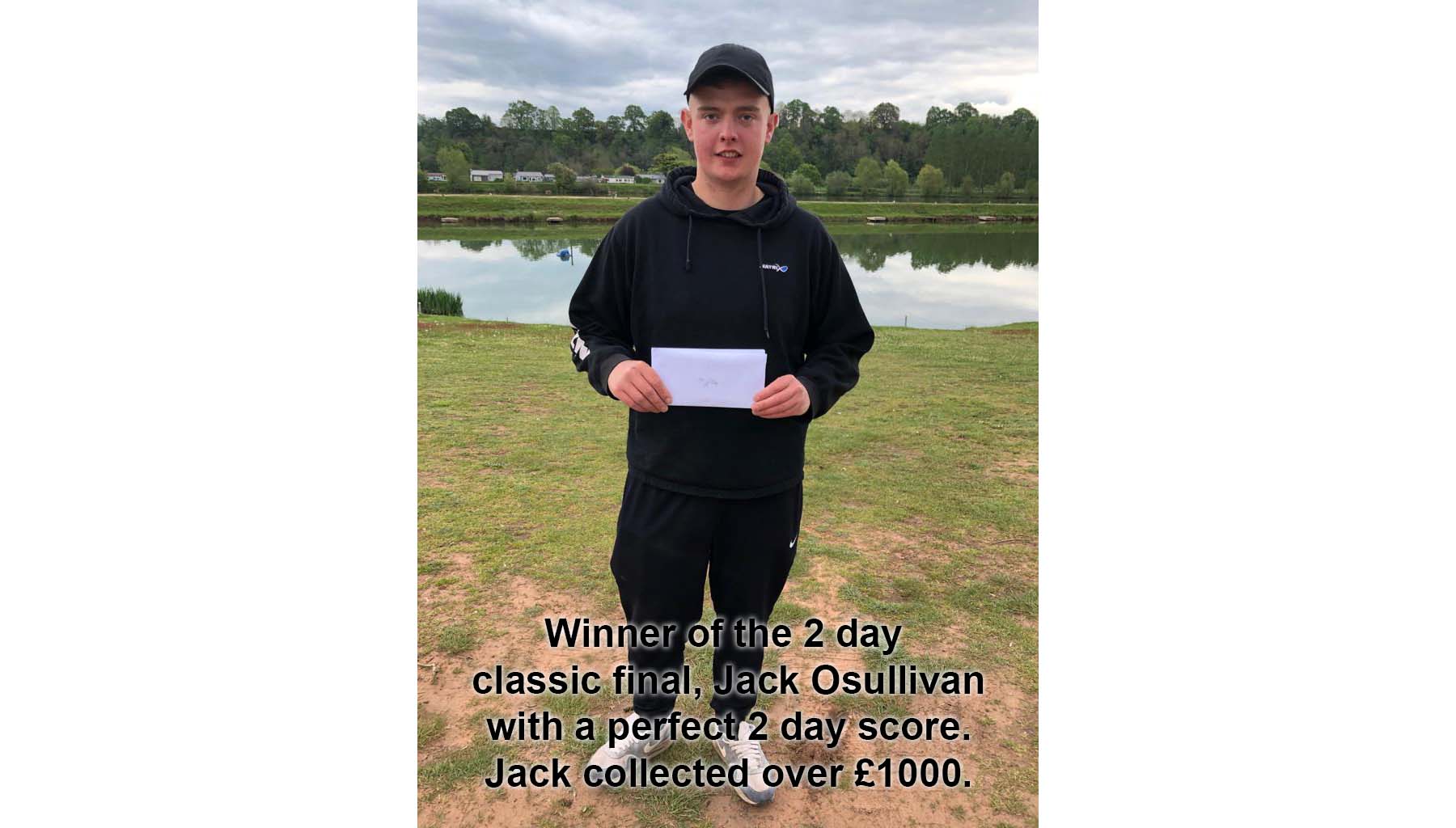 The annual Larford Classic final was again staged utilising both the Match and Specimen Lakes for this popular two day final. Conditions were far from ideal with temperatures of just 8C, making the Bank Holiday weekend one of the coldest on record. That being said, the fishing was still pretty good with 13 weights of over 100lbs on day one. […]

Classic Qualifier, Specimen Lake 21 anglers fished today , temperatures rose to 25C with near flat calm conditions. The carp were swimming shallow towards the dam wall so the anglers pegged in the high 70’s took advantage mugging the carp on long pole with meat and pellets. Winner today was Jordan Holloway from peg 78 with a massive 300-05-00. Jordan […]

Conditions for this latest qualifier were temperature of just 10C and a cold wind. First place was Rich Lawson (Total Angling) from peg 18. Rich caught 15lb of skimmers and two carp for 34lbs, weighing in 49-12-00. Rich fished method and open end feeder. Second on the day was Bernard Ball (Carp Crunchers) who drew peg 80, weighing in 35-07-00. […]

21 anglers fished this latest classic qualifier in mild conditions for late December, of 11C and light wind.   First place was Max G (Bag’em) from peg 24, weighing in 133-06-00. Max fished on pellet and corn long and had carp up to 15lbs. Second on the day was Ray Lamb (Larford) who drew peg 62. Ray caught on pole […]

25 anglers fished this latest Classic Qualifier on the Specimen Lake, looking for a place in the May 2019 final. Conditions were mild and breezy. First was Steve Rocke (Larford) from peg 64 on the Chalet Bank. Steve caught on method and long pole to weigh in 109-09-00. Second on the day was Max G (Bag’em). Max fished on peg […]

Conditions today was very cold with bright sunshine on the Match Lake for the 20 anglers. Overnight temperatures dropped to minus 1C. That being said, the lake fished well and it was Chris Senter (Mossella) who won the day with a brilliant 168-02-00 of carp, F1’s and skimmers. Chris drew peg 52 on the burr bank and fished the short […]

18 anglers fished the Match Lake for this latest Classic Qualifier. Winner of the qualifier was Simon Harris with a weight of 153-02-00. Simon caught from peg 47 fished the short pole and pellet. 2nd overall was Pete Jones from peg 59 weighing in 124-07-00. Pete caught on pole and pellet plus the bomb. 3rd placed Neil Colcombe drew peg […]

Awful conditions for this Sunday open. Drawing rain and heavy winds made for difficult presentation on the Match, Specimen and Arena Lakes for the 42 anglers fishing. Winner today was Ian Wood (Larford) who drew peg 48 on the Match Lake. Ian caught on paste down his edges weighing in 254-08-00. 2nd on the day was Ray Lamb (Larford) who […]

12 anglers fished the Match lake in horrific winds of 25-30mph. Winner was Luke Webster (Bag’em Baits) who drew peg 48. Luke fished down his edge for most of the match with pellet or corn landing good carp for a weight of 199-04-00. 2nd on the day was Darren Hudson from peg 60. Darren caught short and down his edge […]

Conditions today on the Specimen Lake were cold with a hard overnight frost. Winner today was Max G from peg 64. Max fished long pole & short pole with pellet landing an all carp catch weighing in 162-05-00. 2nd on the day was Chris Senter (Mossella / Burt Baits) from peg 62. Chris caught on long pole with pellet and […]

18 anglers fished the second classic qualifier of the weekend on the Specimen Lake. Winner today with a massive 375-12-00 was Max G (Larford) who drew peg 70. Max fished at 6m all day with pole and hard pellet landing quality carp to 20lbs. Max was over in 3 of his nets and could have easily beaten the current lake […]